Ecclesiastical Separation from Brethren is Not a New Doctrine 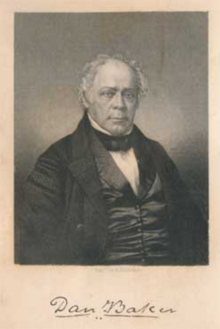 This has been a canard foisted upon biblical fundamentalists for some decades, and I’d like to share an example from church history demonstrating that ecclesiastical separation from brethren is not a new doctrine.

I’ve been reading a biography of Presbyterian pastor and evangelist Daniel Baker (1791-1857) titled Making Many Glad: The Life and Labours of Daniel Baker, by William M. Baker (Presbyterian Board of Publication, 1858; Banner of Truth edition, 2000). It has been an interesting and encouraging read.

About mid-way through Baker’s ministry a controversy arose between the Old and New School Presbyterians.

At the risk of being overly simplistic (which is good, as I’m not an expert on this!), Old School Presbyterians (OSP; examples: Ashbel Green, Charles Hodge, William Sprague) were theologically conservative holding to traditional Calvinistic orthodoxy, believing that conversions and revival were by sovereign grace.

Baker ministered primarily in the South, and admitted that “their wranglings grieved me much. I was wont to say, ‘I have no horns; I know not how to fight; I am one of the working ants.’ On account of my not coming out strongly on either side, I was called a ‘fence-man;’ and upon the fence I remained until, so to speak, every rail was taken down” (pp. 205-06).

Despite his professed inherent non-militancy, once the battle lines were clearly drawn he was avowedly on the OSP side.

Things came to a head when the NSP seemed to rally enough political influence to carry the day. Some of Baker’s NSP friends joyfully triumphed at his expense and asked what he and his Old-school brothers would do? Baker’s response is the first illustration of the doctrine and practice of ecclesiastical separation:

As things turned out, the OSP’s carried the day and enacted the Exscinding Act in 1837 that put out several synods found guilty of NSP. Baker considered this “a strong measure” and “I did not like it much, but I knew of no other that would meet the exigency.” His conclusion provides the second illustration of ecclesiastical separation:

And now, after many years have passed away, I believe it was, so to speak, the very salvation of our Church; for certain forms of heresy and wild measures were coming in like a flood, which, if not checked in time, and effectually, would have led to most disastrous results. (p. 208, emphasis added)

Thus, ecclesiastical separation, while “a strong measure,” is a necessary one to preserve the church by protecting her from destructive error.